Azelio won its first order for TES.POD® in December. The company thus reached a major milestone in the commercialisation of its energy storage system. The order is from ALEC Energy, which will install Azelio’s technology in one of the world’s largest solar parks, the Mohammed Bin Rashid Al Maktoum Solar Complex in Dubai, where it will be part of a mini-grid together with inter alia solar panels and batteries. This will provide renewable energy 24 hours a day, which is an important step in meeting the climate transition. Azelio began installation on site on 20 December.

In the fourth quarter, Azelio also signed an MoU with JET Energy for energy storage of 45 MW in francophone Africa, and in January with SVEA Solar for 8 MW in Sweden. Accordingly, Azelio has signed MoUs for a total of more than 426 MW, corresponding to a storage capacity of 5.4 GWh, thus providing a solid base from which to build on ahead of the start of series production scheduled for Q3 2021.

Another major milestone in Azelio’s commercialisation was reached in the fourth quarter when the performance of the company’s energy storage system could be verified in accordance with the specification of 13 kW output power with a storage capacity corresponding to 13 hours of electricity production. The verification is important to commercialisation and making projects with Azelio’s technology bankable. The protection of the company’s technology was strengthened in the quarter when Azelio was granted four new patents. Azelio’s technology thus has 13 approved patents, and another 15 patent applications pending.

About Azelio
Azelio specializes in energy storage with electricity and heat production. The technology is revolutionary in that the energy becomes dispatchable, making renewable energy available around the clock. The energy is stored in recycled aluminium from which it is converted into electricity and heat with a total efficiency of up to 90 percent. The solution is scalable, sustainable, and cost-efficient from 0.1 MW up to 100 MW. Azelio has approx. 160 employees with headquarters in Gothenburg, production in Uddevalla and development centres in Gothenburg and Åmål, as well as presence in Stockholm, Beijing, Madrid and Ouarzazate. Azelio is listed on Nasdaq Stockholm First North Growth Market with FNCA Sweden AB as Certified Adviser: +46(0)8-528 00 399, info@fnca.se. More about Azelio: www.azelio.com 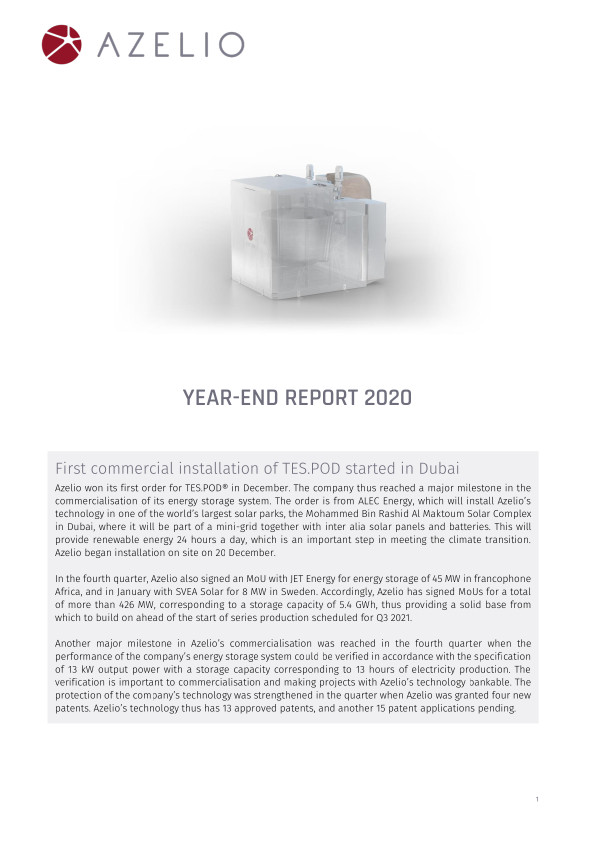