Comments from the CEO

It is with great confidence that I can state that the foundation is now in place for the transformed Azelio. We have updated our goals and then reviewed and adapted our organization and cost structure. The rights issue, completed in October, added approximately SEK 250 million to Azelio after transaction costs. This means that we can now continue the work of establishing the product on the market.

Transformation and focus make a difference

The strategic review that began when I took over as CEO this spring is now at the finish line. The new goals, and a sharper focus on the prioritized activities, are implemented in all plans. The adaptation of the workforce has been completed, and our costs follow the expected development to reach the planned cost reductions of SEK 150 million on an annual basis. In terms of cash flow, the fourth quarter 2022 and the first quarter 2023 will be affected by payments for previously ordered materials, while ongoing costs are expected to continue to decrease as planned.
The sharpened focus also makes an obvious difference in our marketing and sales work. The appointments of local Regional managers in the initial target markets MENA, southern Africa, Australia and the USA, have resulted in new and improved project opportunities with higher quality. This presence makes it possible to build strong customer relationships, thanks to local knowledge and networks.

Continued establishment on the market

The journey towards establishing our energy storage system on the market takes place in stages, from demonstration and verification installations, via a handful of smaller commercial reference projects, and from there an upscaling in size from 2023. We are currently in the phase of establishing the smaller commercial reference projects, and in the transition towards medium-sized projects that in 2023 are expected to gradually grow in size to between 0.5 MW and 5 MW.
For the current status I am pleased to report that the TES.POD unit that was delivered and installed in 2021 to supply the visitor centre at the Noor Energy 1 project in Dubai with electricity is operational.
The facility at WeeBee in South Africa, which generates great interest in the region, has been commissioned and is now in a start-up phase.
Our partnership with Engazaat took another significant step with the announcement of the SAVE Cleantech Utilities alliance, where also Mascara NT is an important member. The first project in the Moghra oasis in Egypt together with Engazaat and Mascara NT is in the development phase, financing and planning are being finalised, and we expect to be able to start deliveries to the project this year.
The project with Handi Stop in the US is progressing according to plan. The units at Handi Stop will be part of the adaptation and verification project for the US market that is being performed together with MMR and are planned to be delivered in December for adaptation at MMR before being installed at Handi Stop. Once verification and certification according to U.S. rules and standards are in place, the TES.PODs are expected to become operational in the second half of 2023.
The project with Masdar in Abu Dhabi continues to be in operation.
In Australia, work continues to secure an order.
In addition to the projects in our target markets, we also have the facility at Industrisupport i Åmål AB, Sweden, in operation, where we have the CE certification in place for the first time.
The goal of having delivered to the commercial reference projects that build the foundation for the next phase by the end of the year seems to me to be well placed to be achieved.
I expect that in 2023 we will make continued market investments in the first projects, which we have accounted for in the capital raise and budget. Thereafter, in 2023, we expect to gradually be able to transition to Azelio's long-term business model – direct sales as a technology supplier.
As a result of inflation and increased material prices, we will raise the price for our system, in line with general market developments.

Poised to take advantage of the opportunities

Global developments keep strengthening the case for clean, affordable, independent, scalable, around-the-clock energy systems. My conviction of this was further strengthened by all the meetings and discussions I had during COP27 in Sharm El-Sheikh. With a unique product, a clear and growing need for our solution, a well-adapted organization and cost structure, and fresh financing secured, I look forward to continuing our focused work together with my competent employees to establish our TES.POD as an important part of future clean energy systems globally, and Azelio as a key player and enabler for the climate transition work. The conditions are in place – we will take advantage of them.

The full report is available as an attachment to this release and can also be found on the company website at the following link: https://www.azelio.com/investors/financial-reports-presentations/

About Azelio
Azelio specializes in energy storage with electricity and heat production. The technology is revolutionary in that renewable energy becomes dispatchable, making clean energy available around-the-clock. The energy is stored in recycled aluminium and converted into electricity and heat with a total efficiency of up to 90%. The solution is scalable, sustainable, and cost-efficient from 0.1 MW up to 20 MW. Azelio is headquartered in Gothenburg, Sweden. Production takes place in Uddevalla and the Company maintains development centers in Gothenburg and Åmål, has a presence in Stockholm, as well as Regional Directors for Australia, US, southern Africa and the MENA region. Azelio is listed on Nasdaq Stockholm First North Growth Market with FNCA Sweden AB as Certified Adviser: More about Azelio: www.azelio.com

This information is information that Azelio is obliged to make public pursuant to the EU Market Abuse Regulation. The information was submitted for publication, through the agency of the contact persons set out above, at 2022-11-18 07:00 CET. 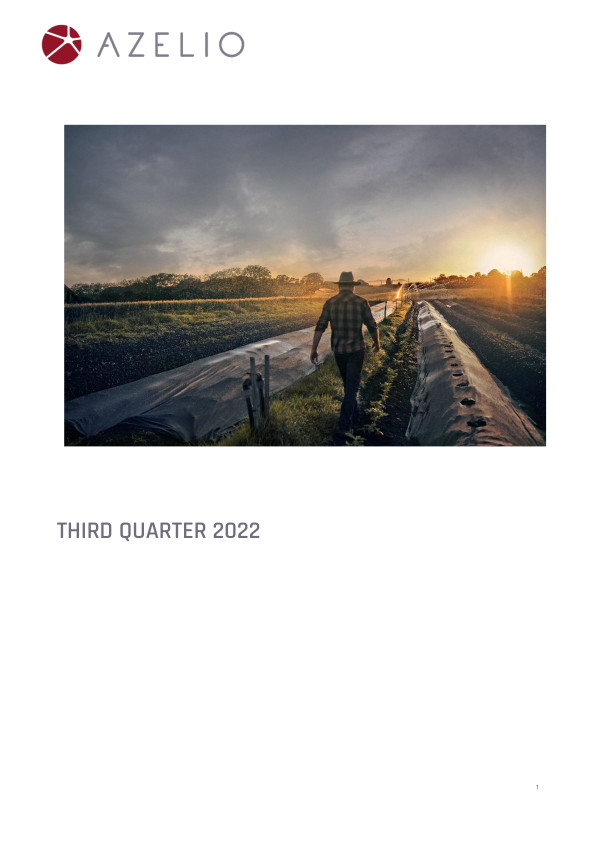